Extreme weather in the Shelburne, Ontario area yesterday has now been confirmed as a tornado touching down. Here’s what you need to know about the Shelburne tornado.

The tornado hit the area just north of Shelburne, a small town about 100 km northwest of Toronto.

Environment Canada said that following a preliminary investigation, it looks as though the tornado was a category F1. The second level of tornado intensity, F1 tornadoes have wind speeds between 117- 180 km/h (73-112 mph) causing moderate damage.

Possibly part of a barn north of Shelburne where possible tornado touched down twitter.com/nparnessCTV/st…

“We had a really strange sky coming in,” John Purdy, owner of the destroyed barn told CBC News. “The horses in the field started to run around like crazy, so my wife went out to bring those horses in. Within about three minutes of that there was driving rain here, you couldn’t even see the road. 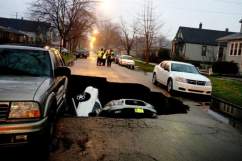 About 200 people were left without power in nearby East Gwillimbury following the storm after hydro poles were knocked down. Cleanup is expected to take two to three days.