Syria’s rebel forces continue to clash with President al Assad’s government in a two-year long civil war, which has inflicted shocking human tolls with over 70,000 killed and over a million refugees. But these staggering numbers only begin to tell the tale of the Syrian crisis. Now recent discoveries have surfaced that may dramatically change the way the international community deals with the war-torn country.

The White House has officially stated that it believes forces loyal to Syrian President Bashar al Assad use chemical weapons against rebels. Although U.S intelligence has emphasized that “more assessments were needed” the U.K. Foreign Office echoed U.S. claims, saying it to had “limited but persuasive information from various sources” of chemical weapons use in Syria. Israeli intelligence sources have reached similar conclusions and added that satellite images coupled with witness testimony had determined the use of a “nerve agent”. Similarly, recent photographs depicting victims with “constricted pupils and foam coming from their mouths” are consistent with the use of a nerve agent, reports The Economist.

Here are the facts you need to about this international concern:

1. The Chemical Weapon is Believed to be Sarin Gas


Syria is believed to possess large quantities of chemical weapons and there has been heightened concern among the international community recently about the safety of the reserves. According to BBC news, Britain obtained samples from inside Syria that were tested by the “Defense Science and Technology Laboratory” tested positive for sarin, a Foreign office spokesman said.

According to the Center of Disease Control and Prevention, sarin is odorless, so most victims have no idea that they were exposed to the gas. Within a minute of exposure, people experience runny nose, tightness in the chest, and pupil constriction. After several minutes, they began having difficulty breathing, become nauseated, and start to drool. The effected later lose control of their bodily functions, begin twitching and ultimately suffocate in a series of convulsive spasms.

2. This Would Be Considered an International War Crime


Sarin has been classified as “a weapon of mass destruction” by the United Nations and it has been outlawed by the Chemical Weapons Convention of 1993.

According to the Daily Mail:

Sarin is a more sophisticated successor to Zyklon B which was used by the Nazis in the extermination of millions of Jews in Hitler’s death camps. It is like some farm pesticides but does not occur naturally and cannot occur naturally. Saddam Hussein used it in the late 80s against Kurdish rebels and it was behind the death of the entire population of Halabja.

Being a breach of international law, the use of chemical weapons will likely invoke international intervention. Having said that, the U.S Defense Secretary Chuck Hagel has stated that it is “too soon to say” whether this could trigger more U.S involvement in the war. “We need all the facts. We need all the information,” Hagel continued.

The United Nations has agreed to test soil samples in Syria. As stated by the Guardian, a positive soil sample would increase pressure on President Obama to act.

The White House has said on several prior occasions that the use of chemical weapons would be a game changer in America’s involvement and a positive soil sample would increase pressure on President Obama to act.

4. The Syrian Government Has Denied the Charges

“Damascus will not use chemical weapons against its own citizens, or in the event of war with its neighbor Israel,” Syria’s Information Minister was quoted as saying on Wednesday, says Reuters.

Although it negated charges,  government officials have said it could use chemical weapons them if foreign countries intervened, a threat that was met with strong warnings from Washington and its allies.

The Syrian government and rebels each accused the other of launching a chemical attack near the northern city of Aleppo last month that allegedly killed 25 people. 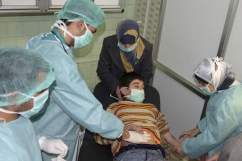 5. The Obama Administration is Afraid of Arming Rebel Forces


It is not clear how the United States would react and intervene in the Syrian conflict. According to the Daily Mail, the Obama administration opposes directly arming Syrian opposition fighters, in part out of fear that the weapons could fall into the hands of Islamic extremists. Syria’s controversial president has also warned that the West will pay a price ‘in the heart’ of Europe and the U.S for their alleged “backing Islamic fundamentalist” in his country’s civil war.
Read More
Assad, Obama, Syria, War

Loading more stories
wpDiscuz
0
0
Would love your thoughts, please comment.x
()
x
| Reply
United States Intelligence points to the use of deadly chemical weapons in Syria. What happens next?