Share via E-mail Share on WhatsApp
Since early this morning, officials and law enforcement agencies have been chasing Dzhokhar Tsarnaev, one of the suspects in the Boston Marathon. We’ll be posting updates throughout the day. If you have any tips, email ian@heavy.com.

Police in military gear now walking around with helmets off and relaxed manner. Crowd cheering. 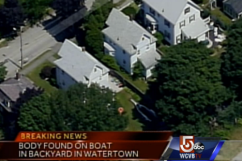 Here’s the wall of police/firefighters blocking street suspect is on. Can’t see full group but I’d estimate 60+ of em twitter.com/jtes/status/32…

PHOTO: Officers ran toward an area in #Watertown where the second bombing suspect was believed to be hiding. twitter.com/BostonGlobe/st…

BREAKING NEWS: Police are still concerned that the suspect may be wearing a suicide bomb vest, the source tells the Globe.

BREAKING NEWS: Police have taken the cover off the boat containing the man believed to be the Marathon bombing suspect. He’s not moving.

Suspect 2 down on Franklin Street in Watertown myfoxboston.com/story/22027989… #fox25 #manhunt

UPDATE 7:02 p.m. – To clarify, a body has been found, after gunfire, not confirmed if it is the suspect, Dzhokhar Tsarnaev.

UPDATE 6:58 p.m. – Body found in a backyard in Watertown, on Franklin Street, WCVB reporting it was found in a boat.

Authorities indicate they believe suspect is alive. Col. Alben said: “My message to him is to give yourself up.”

Clarification: Authorities gave no reason to think suspect is dead. I know that sounds obvious. But this story almost defies belief.

INTERPOL issues global security alert in connection with #Boston marathon bombings at request of #US authoritiesinterpol.int/en/News-and-me…

In describing how suspect got away last night, Alben says he abandoned a car, fled on foot, but doesn’t know where suspect went after that.

UPDATE 6:21 p.m. – “We cannot continue to lock down an entire city or entire state. This is a dangerous person who we believe has killed people.” – Col. Alben.

Alben: Brothers had explosives. Not sure if they planned other attacks.’They threw those at the police officers who were pursuing them. ”

Patrick: “We were very justified’ in extraordinary shut down of region, given ferocity of gunfight.

Mayor Menino: Still some good tips to chase down.’Boston will stand tall. We will never stand down.’

Menino says investigators are following up on a lot of leads

UPDATE 6:10 p.m. – “Based on what we know, we feel confident that we can return to living our lives. But remain vigilant.” – Gov Deval Patrick:

Alben: “There is much left to be done.” Tactical teams being withdrawn. But MSP Will keep troopers in town for the next two orthree days

UPDATE 6:06 p.m. – “We do not have an apprehension of our suspect this afternoon” – Col. Alben of Massachusetts State Police

UPDATE 6:01 p.m. – “They were set up, FBI followed them for years.” – Zubeidat Tsarnaeva, mother of the Tsarnaev brothers, reports Russia Today. She said:

They used to come [to our] home, they used to talk to me…they were telling me that he [the older, 26-y/o Tamerlan] was really an extremist leader and that they were afraid of him. They told me whatever information he is getting, he gets from these extremist sites… they were controlling him, they were controlling his every step…and now they say that this is a terrorist act! Never ever is this true, my sons are innocent!

UPDATE 3:42 p.m. — According to CBS, when the two suspects ran from police, they threw another pressure cooker bomb out of their car window. In addition, there is a 10 inch gash on Tamerlan’s body and Dzhokhar may be wearing an explosive.

From John Miller of @cbsnews: when suspects ran from police they threw another pressure cooker bomb out the car window #wbz

From John Miller of @cbsnews: 10 in gash and scorching on Tamerlan’s torso – younger bro might have explosive on him #wbz

I woke up around 4:30 to check and see what the shootout situation was like. I heard sirens everywhere outside my window. Heard nothing from the school yet. Went back to sleep and woke up at 7:30 with this text/email from Boston College emergency alert:

BC Police Emergency. Due to public safety concerns, BC is closed and classes are cancelled until further notice. Remain indoors. Check http://www.bc.edu/bcinfo

Then we got this:
BC Police Emergency: All students and local residents are asked to shelter in place until further notice. Please remain indoors. http://www.bc.edu/bcinfo for updates.

UPDATE 4:51 p.m. — According to JudicialReport.org, Tamerlan Tsarnaev could have been deported after his arrest.

UPDATE 4:40 p.m. — 911 Operate tweeted that 7 explosives were found, some in Cambridge, some in Watertown.

RIGHT NOW – SEVEN MORE BOMBS RECOVERED WHILE SEARCHING FOR SECOND SUSPECT. SOME AT HOUSE IN CAMBRIDGE AND SOME IN WATERTOWN. NBC. #911BUFF

Brothers Not Suspected In Convenience Store Robbery, Despite Prior Reports bit.ly/10mO1jv#Manhunt

UPDATE 4:30 p.m. — The Boston police will focus solely on Dzhokhar Tsarnaev, according to NBC.

UPDATE 3:32 p.m. — Here’s what it looks like outside of the suspects home. From Buzzfeed:

The scene outside the suspects’ home in Cambridge, MA (photo: @hiimfloyd) twitter.com/hiimfloyd/stat…

UPDATE 3:14 p.m. — According to RT_America, the father of the suspects has told Russian media that “someone framed them.”

UPDATE 3:10 p.m. — Buzzfeed says a Harvard student worked with Dzhokar. “He was very much gung-ho about it and seeming very on top of his life,” she said. “He was very funny and happy and healthy seeming.”

UPDATE 2:58 p.m. — We’ve reached out to UMass Dartmouth to see if they could verify the claim. We’ll update you when they get back to us.

State police told us search for the 2nd bomb suspect might take hours; now about 15 1/2 hours in. A lull in activity @ command centr. #WCVB

UPDATE 2:40 p.m. — Here’s a picture of the Honda Civic officials were looking for.

AP PHOTO: This is the Honda Civic police were looking for apimages.com/OneUp.aspx?st=… twitter.com/BuzzFeedNews/s…

UPDATE 2:11 p.m. — The Boston Globe is reporting that the FBI is looking for “4-door, green 1999 Honda Civic with Massachusetts plates 116GC7.” Suspect may be driving vehicle.

@j_tsar followed me, which means someone is accessing his account

UPDATE 2:09 p.m. — According to WBZ, Dzhokhar drove over his older brother Tamerlan’s body to escape from the police last night.

UPDATE 1:52 p.m. — A Redditor uploaded an image of what he says is a picture of Tamerlan Tsarnaev dead in a morgue. TMZ says a source has confirmed that this image is authentic.

UPDATE 1:46 p.m. — According to ABCNews, 15 police in total hospitalized after shootout last night.

15 police officers were taken to the hospital for injuries sustained in last night’s fire-fight with Boston bombing suspects, @abc reports.

UPDATE 1:31 p.m. — UMass Dartmouth has been evacuated, according to their press conference happening now.

UPDATE 1:23 p.m. — The AP is reporting that the FBI is in the home of the sisters of the suspects, in Northern New Jersey.

RT @michaelskolnik: The FBI is at the northern New Jersey home of the sister of the Boston Marathon bombing suspects. (@ap)

UPDATE 1:05 p.m. — Boston.com reports that the police are about to detonate a controlled explosion on Norfold street near MIT.

UPDATE 12:44 p.m. — According to reports, the rumors about there being more than two bombers is getting stronger:

NBC’s Pete Williams says theory is “gelling” that there may be more people involved than just the two brothers.

UPDATE 12:40 p.m. — MA Police Chief says that there are new leads that have been developing over the past few minutes.

UPDATE 12:35 p.m. — Superintendent of Boston Police says that they are going house to house, searching for Dzhokar. In addition, there will be a controlled explosion in Cambridge as well. Next briefing in an hour, unless there are any updates. They are 60-70 percent of “what we want to cover in terms of search” but no apprehension yet.

According to NBC’s Pete Williams, authorities are thinking that there are more than just the two initial suspects, Dzhokar and his brother Tamerlan.