Fourteen-year-old golfer Tianlang Guan is playing in this year’s Masters golf tournament, and the Chinese phenom is turning heads with his play. Here’s what you need to know about this young player, how he’s doing in the 77th Masters tournament, and the accolades he’s received in his short career.

1. Tianlang Guan Is Doing Great At The Masters


During the first round of the Masters golf tournament, the 14-year-old golfer from Guangzhou, China, shot an opening-round of 73. Bleacher Report also made note of his other opening round accomplishments: five bogeys and four birdies, shooting 38 on the front nine, 35 on the back. Guan spoke with MSN about his 1st day performance:

I felt a little bit nervous on the first tee. But I hit a great tee shot and, after that, everything feels comfortable. … I just had fun today. Pretty much fun.

During the second day of the tournament, Guan was given a one-stroke penalty after being penalized for his slow play on the 17th hole. This is the 1st slow play penalty given to a player in a PGA Tour-sponsored event since 1995. Guan spoke with ESPN and reacted quite positively to his penalty:

2. He Won A Bunch of Tournaments Before Making His Way to the Masters

Everybody had heard of “the kid” in the lead-up to the 77th Masters, the adolescent prodigy who was born a year after Tiger Woods won his first green jacket. Qualifying for Augusta in November, when he won the Asia-Pacific Amateur, Guan became by far the youngest player to compete at the Masters, two years younger than Matteo Manassero was in 2010. But nothing about his first round Thursday showed his age.

61-year-old gold legend Ben Crenshaw played a practice round with Guan on April 8. Crenshaw ended up playing in the first two rounds of the Masters tournament with Guan. While speaking with ESPN, he gave some high praises to the boy:

[Guan] played like a veteran today, a 28-year-old journeyman whose been around the block and made a ton of cuts. He played a beautiful round of golf. He stays well within himself. He’s very confident and his thought process never got rushed. Very patient. Very impressive. [Guan] played about four of the most delicate pitches you have ever seen,” he said. “It must help to have 14-year-old nerves.

4. Guan Is A Self-Taught Golf Player

5. Guan Scored a 69 on The Masters Course the Week Before


The Guardian reported that a week before the Masters tournament began, Guan shot a 69.

6. His Average Ball Drive Comes in a 240-250 Yards
Bleacher Report stated that Guan said he “normally drives the ball 240-250 yards, but obviously he was a little pumped Thursday, averaging 276 off the tee.”

7. His Parents Came Along, But They Still Want Him To Focus on His Education
The Guardian gave some information on Guan’s parents, who accompanied their son to the Masters tournament:

When Guan was playing the course with a member last weekend, he shot 69. Every night since he arrived he has had to start on his homework after finishing. His parents promised to give him the night off after his first round but only because he has an early tee time on Friday.

9. When Tiger Woods Won His First Masters, Guan Wasn’t Even Born Yet

When another golf great, Tiger Woods, won his first major golf tournament in 1997, Guan wasn’t even born yet. The above video news report details the young golfer’s practice session with Tiger. 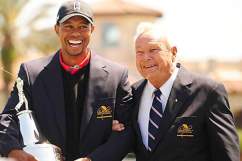 Read More
Golf, Top 10
Follow Heavy ↓
The Chinese golf phenom is tearing it up at The Masters.