The world’s No.1 golfer, Tiger Woods, is lucky he avoided disqualification from the US Masters after he took an illegal dropped shot.

1. This all Stems From Woods’ Strange Shot on the 15th

Woods’ took a dropped shot after a bizarre 87 yard stroke that hit the flag pole and bounced into the water. Lindsay Vonn’s boyfriend then dropped the ball too far away from the water in the eyes of the Masters’ board. He has been given a two stroke penalty as punishment.

According to US golfing rules::

a. Proceed under the stroke and distance provision of Rule 27-1 by playing a ball as nearly as possible at the spot from which the original ball was last played (see Rule 20-5); or

Woods’ admitted in the press-conference:

I went down to the drop area, that wasn’t going to be a good spot, because obviously it’s into the grain,

And it was a little bit wet. So it was muddy and not a good spot to drop.

So I went back to where I played it from, but I went two yards further back.

I tried to take two yards off the shot of what I felt I hit – that should land me short of the flag and not have it either hit the flag or skip over the back.

3. He Then Got Creative With his Paperwork

Woods’ incorrectly filled out his score card for the hole filling in a six instead of a seven.

4. Woods’ is Only Recently Back on Top

Woods’ recently reclaimed the world No.1 title after years of personal trouble. He hasn’t won a major since the Masters in 2009.

5. He isn’t the First Golfer to Break the Rules this Weekend 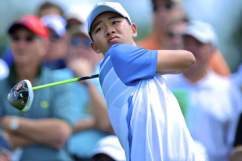 Read More
Golf, Tiger Woods
The World's No.1 might be going home early.