A major explosion at a burning fertilizer plant rocked the small town of West, Texas, on Wednesday night, killing at least five to 15 people and injuring at least 160 more, reports the Wall Street Journal.

Here’s what you need to know about the explosion:

2. The Explosion Was Caught in a Graphic Video

WARNING: The following video is very graphic. Watch with caution.

What seems to be a boy and his father were recording a fire at the West Fertilizer Co. when it exploded. After the explosion, the boy immediately screamed, “Dad, I can’t hear! Please get out of here!” as the father asked if he was okay and sped away. The video is very disturbing, but the father and son seemed to be okay.

3. The Incident Happened in the Town of West Near Waco, Texas

West is located just about 20 miles north of Waco, Texas. Despite its name, the town is situated in the north-central part of the state. It is a small town of just 2,674, as of the 2010 consensus, and is said to be a place where everyone knows each other’s name.

West, TX Explosion *UPDATE – via PD Officer: “West is a tight knit community and they’ve relied a lot on each other tonight.”

4. There are Numerous Fatalities


An exact number is not yet known, but police in Texas said that at least five to 15 people were dead from the explosion and over 160 more have been injured. Residents are waiting for the light of day on Thursday to see the full extent of the damage, but already know what to expect.

5. A Fire Broke Out Before the Explosion

“The fire spread and hit some of these tanks that contain chemicals to treat the fertilizer,” Representative Bill Flores said, “and there was an explosion which caused wide damage.”

6. Nearby Buildings Have Been Majorly Damaged


NBC 5 reports that between 75 and 100 homes have been majorly damaged, with some even being leveled. A local middle school located next to the plant was reported to have been on fire. Mayor Muska said that even his house suffered from blown out windows. Muska, who is a firefighter himself, said that the “very powerful explosion” went off after he and others arrived at the scene of the fire. He reported that the blast “blew my hat off.”

“There are lots of houses that are leveled within a two-block radius,” Dr. George Smith, the emergency management system director of the city, said. “A lot of other homes are damaged as well outside that radius.”

Here’s a map we made to give you some perspective on the different locations impacted by the explosion in West. twitpic.com/ck4dra

People have been reported to be trapped in a nursing home as well as an apartment building that was damaged by the blast. Emergency medical crews have been working diligently to get everyone out.

8. The Entire Town Has Been Ordered to Evacuate


The entire town of West has been ordered to evacuate their homes. Officials feared that the fire and toxic gasses would spread throughout the town through heavy winds overnight. First responders searched the town “house by house.”

9. The Town Felt the Explosion as a 2.1-Magnitude Earthquake.

PHOTO: Seismograph in Amarillo, which is around 400 miles from the fertilizer plant explosion – @tvamy twitter.com/LeBradleyWhite…

The United States Geological Survey recorded the explosion as a 2.1-magnitude earthquake.


The explosion was so powerful that it was heard as far as Waxahachie, Texas, which is 45 miles north of West. 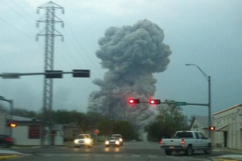 Loading more stories
wpDiscuz
0
0
Would love your thoughts, please comment.x
()
x
| Reply
It's been reported that at least five to 15 people have died from the explosion and over 160 more have been injured in West, Texas.