New York City Mayor Bloomberg held a press conference this afternoon to confirm reports that the Boston bomber suspects, Tamerlan and Dzhokhar Tsarnaev, were heading to New York to continue their reign of terror.

Despite reports yesterday that the Tsarnaev brothers were headed to New York City to “party,” it now appears the suspected Boston bombers aimed to blow up the rest of their explosives in Times Square.

Based on bedside interviews with Dzhokhar, the FBI believes the brothers made a “spontaneous” decision to transport a pressure-cooker bomb and five pipe bombs to the Big Apple.

Instead, the brothers ended up wielding the explosives in a fierce exchange with police when they were tracked down in Watertown, Massachusetts, after killing a cop at the MIT campus in Cambridge.

The brothers carjacked a Mercedes, but its owner escaped and alerted authorities when they stopped for gas. It’s speculated that if the vehicle had plenty of gas the brothers may have made it to New York.

“New York City was next on the list of targets,” Bloomberg confirmed, but he went on to assure the city’s residents that all steps are being taken to combat terrorism.

“There are no guarantees; all we can do is do everything that we can. And that’s what we’ve been doing. … We want to expand our cameras — the number of cameras that we have. … You’re never going to know where all our cameras are. … Do I feel safe going out tonight? Yes. … It’s a dangerous world, but you are probably safer here than anyplace else.”

Ray Kelly and Mayor Bloomberg not mincing words. Bombers planned to drive to NYC to explode bombs, but carjacked vehicle was low on gas. 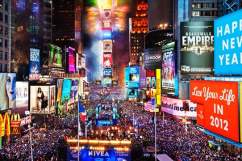