Eugene Maraventano is accused of killing his wife and son in his home in Goodyear, Arizona.

An Arizona man is accused of stabbing his wife to death after fearing that he had passed HIV on to her. He is also accused of killing his adult son. The disturbed man didn’t report the killings until four days later, when his attempts to kill himself failed. Here’s what you need to know.

1. Eugene Maraventano Stabbed His Wife and Adult Son to Death

Eugene Maraventano, 64, of Goodyear, Arizona, was arrested on Monday on two counts of first-degree murder, reports the New York Daily News. He is accused of stabbing his 63-year-old wife, Janet, and his 27-year-old son, Bryan, to death in their home.

“I killed my wife and I killed my son,” Maraventano reportedly told a dispatcher.

2. He Feared He Contracted HIV and Infected His Wife
Maraventano feared that he contracted HIV from prostitutes in New York he used to frequent years ago and passed it on to his wife who had gotten sick. She recently became ill and he originally thought she had cancer, but court documents don’t show whether or not either of the Maraventano’s were diagnosed with HIV or any other disease. Police say the man fatally stabbed his wife with a 14-inch knife while she slept in their bed last Thursday.

3. Maraventano Didn’t Think His Son Would Cope Without His Parents
Fearing that his son would not be able to cope without his parents, he attacked him with the knife when his son opened his bedroom door after knocking. Maraventano also said in a suicide note that he thought that his son might have a mental disability because he played video games all day and did not have a job or a girlfriend.

4. He Then Tried to Kill Himself Several Times, But Failed
After Maraventano killed his wife and son, he tried killing himself multiple times, but failed each time. He reportedly tried cutting his wrists, suffocating himself with a plastic bag and stabbing himself in the chest with the blade.

5. He Called 911 Four Days After Their Deaths
The disturbed man didn’t call 911 to report the deaths until four days later after failing to commit suicide. 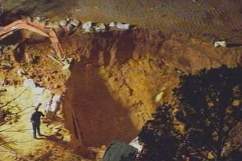 Father of Buried Kids Begs 911 For Help: 5 Fast Facts You Need to Know