An Oregon worker, identified as 41-year-old Hugo Avalos-Chanon, fell into a blender at a meat-processing plant in Clackamas County and died after the machine unexpectedly started up as he was cleaning it, reports Oregon Live.

Avalos-Chanon worked for DCS Sanitation Management Inc., a company contracted to clean meat-processing equipment for Interstate Meat Distributors. He was cleaning the facility with several other workers Friday night when he fell in. Authorities were called around 11:45 p.m. after Avalos-Chanon was found in one of the blenders that is used to regulate the fat content of ground meat. Firefighters returned to the plant the next day to dismantle the blender and remove his body. It’s reported that one of his co-workers hit the emergency stop button, but it was too late. Deputy state medical examiner Dr. Cliff Young said the worker died from “blunt-force injuries and chopping wounds.”

Police don’t suspect foul play, but Oregon Occupational Safety and Health Division (OSHA) investigators are working around the clock to examine the evidence. OSHA said that the meat plant was cited last fall after finding that machinery in the meat-grounding room wasn’t properly locked down during a cleaning, but it is unclear if the same is true for Friday’s incident.

Darrin Hoy, president of Interstate Meat Distributors, said what happened to Avalos-Chanon was an “unfortunate incident.”

“We’re not looking forward to reliving through any of it again,” Hoy said. 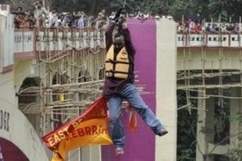 Indian Daredevil Dies While Zip-Lining From His Ponytail

Loading more stories
wpDiscuz
0
0
Would love your thoughts, please comment.x
()
x
| Reply
Hugo Avalos-Chanon fell into a blender at a meat-processing plant and died after the machine unexpectedly started up as he was cleaning it.