The Phoenix police department went above and beyond the call of duty when the opportunity arose to support the family of a fellow officer.

Policeman Daryl Raetz was killed in the line of duty just three days before his daughter’s kindergarten graduation. Nearly 300 of Raetz’s colleagues took it upon themselves to comfort the family he tragically left behind by showing up at the graduation and giving young Tatum Raetz an ovation.

Phoenix Police Department spokesman James Holmes described the moment: “When they stepped out of the car, they saw a sea of blue out there. The officers were clapping, calling out her name, congratulating her. The look on her face was absolutely priceless.”

The ceremony gained an unexpected poignancy as Daryl Raetz’s presence was felt through the compassion of his fellow police officers. The widow and daughter were understandably emotional, as were the policemen. “We probably soaked the sidewalk,” Holmes said. “It was impossible not to be emotional in that moment.”

A hit and run took Raetz’s life, just after he had been investigating a DUI case. Raetz had served in Iraq and joined the force in 2007.

The love for Officer Raetz by the entire department, as well as Raetz’s love for his family, was palpable, even without his physical presence. 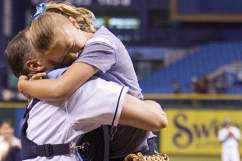 Loading more stories
wpDiscuz
0
0
Would love your thoughts, please comment.x
()
x
| Reply
In an emotional display, 300 officers honor the family of a fallen policeman killed in a hit and run accident while on duty.