A car crash in Upstate New York killed seven people, including children, on Wednesday after a tractor-trailer collided with a minivan. Here’s what you need to know.

1. It Happened 25 Miles South of Syracuse

The accident happened on a rural two-lane highway in the town of Truxton, New York, just 25 miles south of Syracuse. 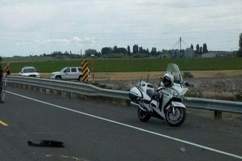 2. A Tractor-Trailer Crashed Into a Minivan

A tractor-trailer, like the one pictured above, detached and collided with a minivan carrying eight people.

According to KSBY, a tractor-trailer rig lost its trailer as it was traveling south around 6 p.m. and collided with a minivan in the opposite lane. The force of the minivan reportedly ripped the minivan apart.

“It was a bad accident,” Capt. Mark Helms of the Cortland County Sheriff’s Department said.

One survivor in the minivan was taken to the Upstate University Hospital in Syracuse.

Seven of the eight people in the minivan died in the accident. Authorities have not released the names of the victims, but among them were children. One survivor was taken to the Upstate University Hospital in Syracuse, however, their condition was not immediately known. Douglas Randall, the fire commissioner for nearby Town of Cuyler, said distraught family members of the deceased were being escorted away from the scene.

4. Two People in the Truck Were Not Injured

Capt. Helms said two people were driving the truck that was carrying the tractor-trailer were not injured in the accident.

5. The Cause of the Accident is Unknown

Officials have not disclosed what caused the accident, but The National Weather Service in Binghamton said that there were heavy thunderstorms, including hail, at the time of the collision. 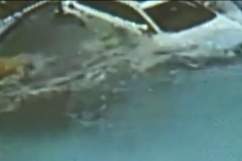