Olympic sailor Andrew Simpson died on Thursday when his sailboat capsized while he was training for America’s cup.

The entire Artemis team is devastated by what happened. Our heartfelt condolences are with Andrew’s wife and family.

The disabled Swedish America’s Cup entry is being towed to shore. twitter.com/HeatherIshimar…

Andrew “Bart” Simpson won a gold medal in the 2008 Summer Olympics in Beijing alongside Iain Percy in the Star class. The 36-year-old, who raced Star sailboats, also won a silver medal at the 2012 London Olympics. The British athlete lived in Sherborne in Dorset, England until moving to the United States to train for America’s cup.

2. It Happened in the San Francisco Bay on the Northwest Side of Treasure Island

3. Simpson Was Training for an Upcoming Race When His Boat Capsized

Simpson was training for America’s cup in San Francisco when his 72-foot catamaran boat capsized, reports the Los Angeles Times. The sailor became trapped underneath and it is being reported that he was under the sailboat for at least 10 minutes before rescuers got to him. He was taken to St. Francis Yacht Club on the shore where paramedics performed CPR on Simpson, but were unable to revive him. He is the second person to be killed while training for the America’s cup. The sailor once said that winning the cup was his biggest goal.

4. His Team Released a Statement

It is with immense sadness that Artemis Racing confirms the tragic death of crewmember Andrew ‘Bart’ Simpson today in San Francisco. Simpson, a British Olympic gold medalist, was one of the 11-man crew aboard Artemis Racing’s AC72 catamaran which capsized during training on San Francisco Bay ahead of this summer’s America’s Cup. All other crewmembers are accounted for. Simpson, however, was trapped underneath the boat and despite attempts to revive him by doctors afloat and subsequently ashore, his life was lost.

The rest of the 11-man crew was accounted for, but it is being reported that New Zealander Craig Monk also suffered a cut to his neck, reports 3 News. The injury is considered serious but not life-threatening. 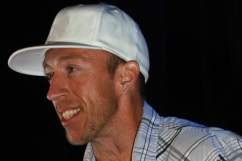 Loading more stories
wpDiscuz
0
0
Would love your thoughts, please comment.x
()
x
| Reply
Olympic sailor Andrew Simpson died on Thursday when his sailboat capsized while he was training for America's cup.