Three teenagers who had vanished without a trace in a Cleveland neighborhood were found alive after being held captive for about a decade. Luckily, Amanda Berry, Michelle Knight and Gina DeJesus were found inside the home of 52-year old school bus driver Ariel Castro.

Although these three cases have been simultaneously solved, there is one very similar disappearance that is still shrouded in mystery. Ashley Summers was just 14 years old when she disappeared in 2007  from the same Cleveland neighborhood Berry, Dejesus and Knight went missing. Questions about Summers’ possible abduction are surging — pushing her unresolved case back into the limelight.

Was Summers abducted by Castro as well? What is her connection to the other abductions?

Here’s what you should know about Ashley Summers.

1. She Was Believed to Have Run Away From Home

Just like Michelle Knight — one of Castro’s victims — authorities originally believed Knight simply ran away from home after fighting with her mother, reports Yahoo. When she was never heard from or seen again, police began to suspect she was being held against her will.

Debra Summers says her niece, Ashley, was not the type of girl who would leave without coming back.

2. Her Grandmother Claimed She Saw Summers

In an interview in 2009 on The Oprah Winfrey Show, Summers’ step-grandmother claimed she say Ahsley driving a car circa 2007. She had “short, dyed-blond hair.” The car disappeared before the step-grandmother could turn the car she was driving around. The FBI discounted this, saying “There’s been no legitimate sighting of Ashely since she left her house.”

3. The Castro Abductions Happened Close to Where Summer Was Last Seen

When looking at a map that takes into account all four disappearances (Summers, Berry, DeJesus and Knight), it’s easy to see how the disappearances could have been related. Ashley’s abduction happened within a mile and a half from where Berry and DeJesus were last seen. It is only three and a half miles away from Ariel Castro’s house at 2207 Seymour Ave

4. One of the Kidnapped Women Alerted Police There May Be a Fourth Victim

Fox 8 Cleveland reports that there details of a possible fourth kidnapped victim came to light during police interviews with Michelle Knight — Castro’s oldest known victim who was rescued on Monday:

A source further noted that Knight told police that there was another woman in the home when she got there, but one day she woke up and the woman was gone. There is writing on the wall in the basement which includes the name of a female and says, “Rest In Peace,” but police do not know if that is related to the case at this time. 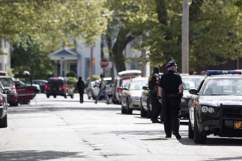 There May be a FOURTH Victim in Cleveland Kidnapping

5. The FBI’s Investigation into the Disappearances of Berry and DeJesus Included Ashley

In April 2009, the FBI said their investigation into the disappearances of Berry and DeJesus had expanded to include Ashley. Michelle Knight was not included in this trio. Authorities believed that ”
“one or more of the girls may have been forced into prostitution.”

Ashley’s physical appearance as well as the proximity of her home to the other disappearances meant investigators suspected the cases were linked. The names Berry, DeJesus and Ashley then came up in a Cleveland police training session in August 2010. Instructor George Kwan held up their photographs after his lecture about human trafficking. “What do they have in common?” he said. “They are all attractive, they are all between the ages of 14 and 17 and they are all gone.”

7. Her Family Thought Summers Was Rescued on Monday — Before Michelle Knight Was Identified

On Monday, before the third woman, Michelle Knight, was identified, Summers’ aunt Debra initially thought she was among them.

“I called my mom, I called my sisters, I called everybody,” she told CNN, standing in front of her house with tears in her eyes, agreeing that she was crushed when Ashley was not one of the saved women. “I was upset, but I was happy at the same time that they found the third girl,” she said. “We’re hoping that it’s connected, and they knew where she was. We’re hoping for a miracle.”

8. FBI Has No Proof the Cases are Related

“We continue to look for Ashley,” FBI spokesperson Vicki Anderson told the Toronto Star. “She was a young girl too who went missing and it was from the same area.” However, she says the FBI is holding out hope that this sensational rescue on Monday will spark more tips to the FBI.

9. Summers Lived with her Great-Uncle

Summers left her mother’s home, where four younger siblings were then also living, and moved to her great-uncle’s residence, so she could be closer to friends. She was the oldest of seven children whose ages range from 2 to 16. Summers reportedly left her great-uncle’s home after an argument, taking all her clothes with her, before her disappearance.

10.She Has a Tattoo of a Heart on One Arm with the Name “Gene”

It’s unknown who “Gene” is, but we do know Summers had a boyfriend at the time of her disappearence.