A woman was found alive on Friday after being buried in the rubble of the garment factory building that collapsed 17 days ago in Bangladesh that killed more than 1,000 people and injured over 2,500 more, reports The Telegraph.

The young woman, who identified herself as Reshma, was discovered beneath the wreckage just as clearance workers were about to break apart the last section of a concrete floor. Worker Jamal Sheikh was surveying the area and calling out for any survivors when he heard a voice shout for help.

“I asked if there was anyone inside the debris and then someone, a female, replied: ‘help me, save me,'” Sheikh said. “I asked ‘what’s your name?’ And she replied ‘Reshma.’ I just rushed to the other rescuers, the seniors, and informed them so she could be rescued. I heard her voice in the distance.”

Reshma was in the basement of the now-flattened nine-story Rana Plaza in Dhaka, Bangladesh. Rescuers gave her water and a biscuit as an ambulance waited for her to be pulled out of the rubble. She was finally rescued and taken to a nearby hospital. She was described as being in remarkably good shape despite what she has been through.

Reshma is the first survivor to be found since the day the building collapsed over two weeks ago. 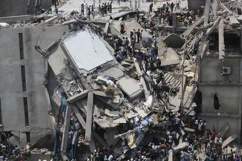 Loading more stories
wpDiscuz
0
0
Would love your thoughts, please comment.x
()
x
| Reply
The woman was found alive in the rubble of the garment factory building collapse that killed over 1,000 workers.