According to a statement released by the Boy Scouts of America, the longstanding ban on openly gay members has officially been lifted, however, gay adults will continue to be banned from leadership roles.

“Today, following this review, the most comprehensive listening exercise in Scouting’s history the approximate 1,400 voting members of the Boy Scouts of America’s National Council approved a resolution to remove the restriction denying membership to youth on the basis of sexual orientation alone,” the statement said.

Members of the Boy Scouts of America’s National Council voted on the measure Thursday in Grapevine, Texas, which was approved by 60 percent. While the ban on openly gay boys and young adult members has been lifted, the organization will still not allow gay adults to serve in leadership positions.

“A change to the current membership policy for adult leaders was not under consideration; thus, the policy for adults remains in place. The BSA thanks all the national voting members who participated in this process and vote.”

Many praised the decision as a huge step forward, but not all approved. Texas Gov. Rick Perry expressed his disappointment with the new policy.

“While I will always cherish my time as a Scout and the life lessons I learned, I am greatly disappointed with this decision,” Perry said.

Religious leaders have condemned the lift as “incompatible with the principles enshrined in the Scout oath and Scout law,” while John Stemberger, head of the conservative evangelical Florida Family Policy Council, says allowing gay members will “mean the blunt injection of hypersexuality and gay activism into a youth organization.” 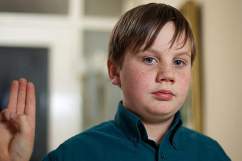 Read More
Boy Scouts, Equality
Follow Heavy ↓
wpDiscuz
0
0
Would love your thoughts, please comment.x
()
x
| Reply
The longstanding ban on openly gay members in the Boy Scouts has officially been lifted, however, gay adults will continue to be banned from leadership roles.