Confirmation has arrived today from the British Foreign Office that one of the men killed alongside American Nicole Lynn Mansfield this week was a British Citizen.

Speculation arose yesterday when Syria Online posted an article with the names and passports of Nicole Lynn Mansfield and the British man she was found with.

Although this name is unconfirmed as of yet, initial reports out of Syria claimed the name on the British passport was Ali Al-Manasifa of London who was born in 1990.

Foreign Fffice confirms British national has been killed in Syria, adding the family has been informed and is receiving consular assistance 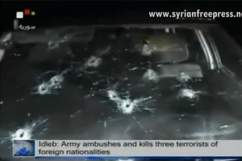