The U.S. Consulate was attacked on September 11, 2012, killing four Americans.

According to NBC Nightly News, a central figure in the September 11, 2012 Benghazi attack that killed four Americans has been ID’d and federal charges against him will soon be made public.

BREAKING: Central figure in #Benghazi attack ID’d, not yet in US custody; fed. charges to soon be made public -@petewilliamsnbc @jonathan4ny

Just two weeks ago, the FBI released photos of three men present during the attack on the U.S. Consulate in Libya that it wanted to question. However, it did not say whether the men, pictured holding guns, were suspects.

The FBI released these images of three men that were present during the attack who it wants to question.

“The FBI is now asking Libyans and people around the world for additional information related to the attacks,” the federal law enforcement agency said. “We are seeking information about three individuals who were on the grounds of the U.S. Special Mission when it was attacked. These individuals may be able to provide information to help in the investigation.” 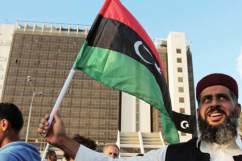 Loading more stories
wpDiscuz
0
0
Would love your thoughts, please comment.x
()
x
| Reply
A central figure in the September 11, 2012 Benghazi attack that killed four Americans has been ID'd and federal charges against him will soon be made public.