New Jersey Governor Chris Christie and Jersey Shore star Nicole “Snooki” Polizzi met up today in the Shore town of Seaside Heights, where the hit MTV show took place. They were on hand for the reopening of the boardwalk, rebuilt after it was demolished by Hurricane Sandy.

Christie, who became a national household name as during coverage of the hurricane’s aftermath, hated Jersey Shore because it introduced the masses to the wrong impression of his beloved home state. And his exchange today with Snooki was awkward at best. Check it out here:

But there was apparently more animosity behind the scenes, according to Snooki, who tweeted this message with an Instagram link to a photo of the encounter:

Getting told why we are bad for jersey. Amazing. instagram.com/p/Zs1CPCBjtS/ 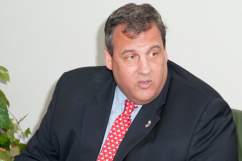 Loading more stories
wpDiscuz
0
0
Would love your thoughts, please comment.x
()
x
| Reply
Everyone knows Chris Christie hates Snooki. But today we got to see it on his face.