According to a statement from Cleveland kidnapping victim Michelle Knight, there may be a fourth victim of Ariel Castro, a woman who disappeared from his house of horrors at 2207 Seymour Avenue.

A source further noted that Knight told police that there was another woman in the home when she got there, but one day she woke up and the woman was gone. There is writing on the wall in the basement which includes the name of a female and says, “Rest In Peace,” but police do not know if that is related to the case at this time.

Above and below, recently released photos of Michelle Knight. 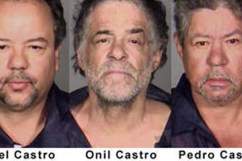 Kidnap Victims Had ’5 Pregnancies’; Cops Dig for Bones in Backyard

Loading more stories
wpDiscuz
0
0
Would love your thoughts, please comment.x
()
x
| Reply
According to a statement from Cleveland kidnapping victim Michelle Knight, a possible fourth victim of Ariel Castro was in the home but disappeared.