A family of four from Stanwood, Washington was was killed on Sunday after a car crash sent their vehicle into a a flowing irrigation canal and submerged near George, reports KIRO News 7.

The Grant County Sheriff’s Office said that the family’s SUV collided with another car as they were on their way out of town for the holiday weekend. They then struck a guardrail and plunged into the canal where it was pulled 100 yards downstream.

Gabriel Ochoa, 35, and his wife, Dioselina Buenrostro, 33, died at the scene while their two girls, Sandra Ochoa, 9, and Yesenia “Jessie” Ochoa, 4, died later at Quincy Valley Medical Center. A coroner believes the family most likely drowned. A woman driving the other car suffered from minor injuries.

Gabriel Ochoa worked at a dairy farm in Stanwood. His co-worker, Karen Dolan, said they were on their way to Quincy for Memorial Day.

“They didn’t do anything wrong except for trying to spend the holiday weekend with friends and family,” Dolan said.

Authorities are still trying to figure out how the two cars collided and who is to blame. 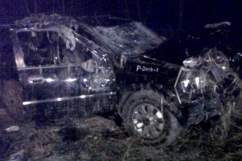 6 Teens Killed in Crash: 5 Fast Facts You Need to Know

Read More
Car Crash, Washington
A family of four from Washington was was killed on Sunday after a car crash sent their vehicle into a a flowing irrigation canal and submerged near George.