Houston, we have a problem.

A Los Angeles-to-New York American Airlines flight was forced to make an emergency landing in Kansas City on Friday to remove an “unruly” passenger who wouldn’t stop singing, reports WBTV.

The passenger had been belting out the Whitney Houston (and Dolly Parton) classic “I Will Always Love You” at 30,000 feet — and refused to stop. 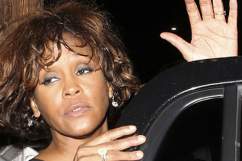 The woman was being disruptive and was removed from the plane for interfering with the flight crew, there was a federal air marshal on the aircraft, who subdued the woman and put her in cuffs and removed her from the plane.

KCTV reports the woman claimed her diabetes as the cause of her incessant singing.

Maybe the woman just felt at that altitude she would be closer to Whitney and thought it would be an appropriate time to pay tribute to the late superstar.

By the way, here’s how it’s supposed to sound:

Loading more stories
wpDiscuz
0
0
Would love your thoughts, please comment.x
()
x
| Reply
The flight made an emergency landing to remove the offending singer.