Boat explodes in Edgewater MD withkids on board. Adults on board pushed the kids into the water to save them. twitter.com/kendisgibson/s…

A boat explosion in Maryland has marred the holiday weekend — injuring several people including children. Here’s what we know about this breaking story.

1. The Accident Occurred at a Marina

The explosion shook the calm of a relaxing Memorial Day around noon today at Oak Grove Marina on Solomons Island Road in Edgewater, Maryland — on the South River, which flows into the Chesapeake Bay.

Early reports varied as to the number of injured — with estimates as high as nine people including seven children. However, CBS Baltimore now reports nine occupants, seven hospitalized, three kids:

There were nine occupants on the boat at the time; seven were sent to local hospitals. Two refused treatment. Three children—two 9-year-olds and a 12-year-old—were transported to Hopkins. Four adults were transported to Bayview Burn Center.

3. The Boat Had Just Been Refueled

The blast occurred right after the boat fueled up at the marina. The boat’s operator was attempting to restart the engine of the 32-foot vessel after it stalled. Investigators believe gas vapors ignited, causing a so-called flash fire.

4. The Water Saved Them

The boat’s occupants leapt into the water to escape the fire. One witness described via Twitter that the adults pushed the kids into the water.

According to this report from KTLA:

The holiday statistics are sobering indeed: last year the Coast Guard reported some 650 deaths and 3,000 injuries nationwide due to boating accidents, and fully 14% of the casualties came over holiday weekends. 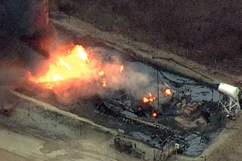 Massive Explosion Sparked by 2 SMOKERS on Top of Oil Tank