Abdul-Baki Todashev claims his son, Ibragim Todashev, was killed “execution style” while being interrogated by the FBI about his ties to a Boston Marathon bombings suspect. (Getty Images)

Abdul-Baki Todashev, the father of Florida resident Ibragim Todashev, who was shot and killed by the FBI last week after being questioned about his connection to the Boston Marathon bombing suspects, claims his son was killed “execution-style.”

While speaking at a news conference in Moscow, Russia, on Thursday, Todashev showed pictures of his deceased son in a Florida morgue and claimed that his son was shot six times in the chest and once in the back of the head.

The photos: Ibragim #Todashev‘s father says they show his son was shot six times, then once in the head.Very graphic twitter.com/ARothmsk/statu…

This news comes after reports of FBI sources saying that the 27-year-old Todashev was unarmed during the confrontation that led to his death. 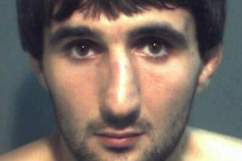 FBI sources, speaking to the Washington Post on the condition of anonymity, claim that the violent incident occurred after Todashev flipped a table over and lunged at the FBI agent and two Massachusetts state troopers while being questioned about his connection to Boston Marathon bombing suspect Tamerlan Tsarnaev.