An Obama administration official confirmed Friday night that Israel conducted an airstrike into Syria overnight Thursday and into Friday, reports The New York Times. Israel has not confirmed the attack, but it has launched a strike on Syria as recently as January.

1. Israel Did Not Enter Syrian Airspace

The U.S. does not believe that Israel entered Syrian airspace to carry out the attack, but they did detect Israeli warplanes over Lebanon at the same time. According to the Lebanese army website, 16 flights by Israeli warplanes penetrating Lebanon’s airspace are listed from Thursday evening through Friday afternoon local time.

2. Officials Do Not Believe Israel Targeted a Chemical Weapons Facility

MSNBC reports that the Israel would not likely target a chemical weapons facility, which could cause deadly harm, but rather a weapon delivery systems or launch systems.

3. The Israelis Have Said They Would Strike Any Targets Transferring Weapons to Hezbollah

Israel has said in the past that they would intervene if advanced Syrian weapons fell in the hands of terrorist groups, including Lebanon’s Hezbollah, reports NBC News.

“We will do whatever is necessary to stop the transfer of weapons from Syria to terrorist organizations, a source in the Israeli defense establishment told CNN’s Sara Sidner. “We have done it in the past and we will do it if necessary in the future.”

This would be the second time this year that Israel launched an airstrike against Syria. In late January, Israel sent a group of fighter jets to attack a convoy carrying anti-aircraft missiles they believed were headed to Hezbollah.

5. President Obama is Reluctant to Get Involved

The “red line” for Syria would be if it were using chemical weapons. Intelligence has raised concerns that the country has used them, but Obama said that there is not enough evidence. The President has been reluctant to get involved with the Syrian conflict and has ruled out placing American forces on the ground. 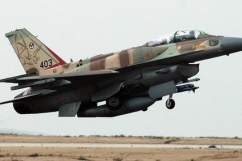 Loading more stories
wpDiscuz
0
0
Would love your thoughts, please comment.x
()
x
| Reply
Reports say that Israel may have conducted an airstrike into Syria, believed to prevent a shipment of weapons headed for Hezbollah in Lebanon.