A 5-year-old girl was killed after a suicidal man jumped from his 11th floor apartment in South Korea and landed on top of her on Wednesday, reports KSDK 5.

The little girl and her parents were just walking out of the building when the 39-year-old tenant took his final plunge. The man died on impact and the girl was taken to the hospital where she was treated died from a skull fracture. Her parents were unharmed.

It is unknown why the man committed suicide, but KDSK reports that he was being treated for depression.

He did not leave a suicide note. 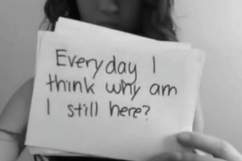 Read More
South Korea, Suicide
wpDiscuz
0
0
Would love your thoughts, please comment.x
()
x
| Reply
The man was killed instantly while the girl later died in the hospital from a skull fracture.