Michelle Knight, pictured as a teenager before she disappeared in 2002.

Michelle Knight is the victim of the Cleveland kidnapping that suffered the worst and the one we know least about. And while the other two victims, Amanda Berry and Gina DeJesus, returned home to their families and a treasure trove of balloons, Knight has refused to see her own family members. Here’s what you need to know.

Now-32-year-old Michelle night is the oldest victim that was kidnapped by suspect Ariel Castro. She was 21 when she disappeared in 2002 and held captive for 11 years, enduring over a decade of being beat a raped. Her fellow captives were released from the hospital and enjoyed welcome celebrations, but the Daily Mail reports that Knight has shunned her family members and is currently staying at the DeJesus household.

“Michelle doesn’t want to go back to her own family because they abused her before she was kidnapped and they only want the money now,” One of DeJesus’ neighbors, Lupe Collins, said.

It’s been reported that Knight was also upset that her family told police that she ran away when she disappeared after her toddler son was taken away from her by Child Protective Services.

2. Her Mother and Grandmother are in Cleveland

Knights mother, who resides in Naples, Florida, and grandmother have been in Cleveland since the news that the three women were discovered, but Knight has refused a meeting with them.

“I just wish that my daughter would reach out and let me know that she’s there,” her mother, Barbara Knight, said. “She’s probably angry at the world because she thought she would never be found but thank God that somebody did.”

3. Knight’s Brother is the Only Family Member to See Her

Knight hasn’t shunned the entire family, however. The victims twin brother, Freddie Knight, visited her in the hospital and said they had an emotional reunion.

“When I saw her, she was white as a ghost,” Freddie, 32, told The New York Post. “But she told me, ‘Come over here and give me a hug. It’s been ages!’ She was happy to see me. It was emotional. She even recognized me–even though it had been 11 years.”

Like Knight, her brother also had a turbulent relationship with the family growing up. He was kicked out of their mother’s house when she was just 14 years old.

4. She Was Held Captive the Longest

Michelle Knight has no undoubtedly suffered the most at the hands of Ariel Castro. She was held in captivity the longest and she suffered the most severe injuries. She was beaten so badly by the suspect kidnapper that she sustained hearing loss and a fractured face. She requires facial reconstruction surgery to repair the damage from the beatings.

Knight reported to authorities that Castro impregnated her at least five times and then starved her and punched her in the stomach to induce miscarriages. She was even forced to deliver the baby of fellow abductee Amanda Berry, whose daughter survived and is now six years old. 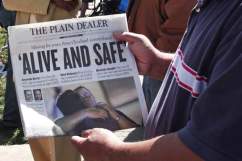 Loading more stories
wpDiscuz
0
0
Would love your thoughts, please comment.x
()
x
| Reply
Michelle Knight has been released from the hospital and is now staying with fellow abductee Gina DeJesus.