The former star of MTV’s Laguna Beach and teen-drama One Tree Hill, Stephen Colletti, was a witness to the suicide shooting that occurred at Houston’s Bush Intercontinental Airport this afternoon. The actor was live tweeting his movements directly after the shooting:

5 or 6 shots fired 50 feet from me in Houston Airport. Terminal B. Never seen so many people move so fast and find such nooks to hide. #woah 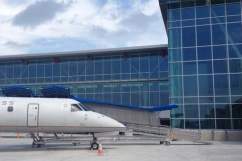 Credit to the officers on scene here, the situation became calm, panic-free quickly however the terminal is still on lock down.

My instincts lead me to an all too familiar place of panicked decisions, the kitchen of a McDonalds.

Trapped in McDonalds, I felt incredibly unsafe, then the walk-in freezer door swings open and a sweet little older woman waves me in. #angel

Colletti is also the former boyfriend of Hayden Panettiere. and is currently stepping out with his former One Tree Hill co-star Chelsea Kane.