In a sad turn of events, the Emu that escaped from a Long Island home in Suffolk Country yesterday has died.

“Emu,” as the Weinkselbaums affectionately called him, was a legal and lovable pet that resided with the family for over ten years, according to Newsday. The bird escaped on Memorial Day from the family’s back yard and led the police on a long chase that ended in the over-sized bird tumbling into the canal at Copiague. After the police wrestled over-200-pound bird out of the water, Emu died.

Here is a video of the police attempting to pull the bird from the water:

Emu would not want us to weep for his death, but rather, rejoice in his life. According to Gothamist, the bird will be cremated.

man i did not need to know a runaway emu just drowned in long island today :( 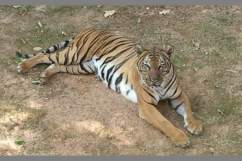