This week the world is getting nervous about the spread of the SARS-like MERS (Middle East Respiratory Syndrome) virus in the wake of a speech given by the UN’s Director-General of the World Health Organization Margaret Chan.

Here’s what you should know about this global health threat.

1. The WHO Called MERS a “Threat to the Whole World”

At a May 27 speech in Geneva, Switzerland, WHO Director-General Margaret Chan called the emerging MERS corona virus a “threat to the whole world.” Addressing the World Health Assembly, Chan said:

Looking at the overall world health situation, my greatest concern right now is the novel coronavirus. We understand too little about this virus when viewed against the magnitude of its potential threat. Any new disease that is emerging faster than our understanding is never under control.

We do not know where the virus hides in nature. We do not know how people are getting infected. Until we answer these question, we are empty-handed when it comes to prevention. These are alarm bells. And we must respond.

You can read the full speech at the WHO’s website. 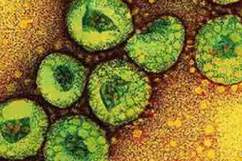 Mutated SARS Spreads to UK from Middle East — of 10 Infected, 5 Are Dead

As of today, 27 people have died from the MERS virus. All of the casualties have recently visited or live in the Middle East.

3. The Most Recent Victim is French and Died in France

A 65-year-old Frenchman is the most recent causality of the new virus after being admitted to the hospital on May 8. He contracted the virus on a recent trip to Dubai. According to French International News, the man was being treated at the Centre Hospitalier Universitaire in the northern French city of Lille.

4. Current Figures Say 49 Have Been Infected

CNN confirms that that current estimates from the WHO put the number of infected people at 49, as of Wednesday. Although most have been in the Middle East, specifically concentrated on the Arabian Peninsula, the traveler who brought the virus from Dubai to France in early May has supposedly infected one of his hospital roommates. The roommate is in stable condition.

According to the most recent public update by the WHO on May 23, there have been confirmed cases in nine nations. However, cases existing outside of the Middle East were contracted either through visits to the region, or through close proximity with an infected individual. The WHO reports:

6.The Virus is SARS-Like But Not SARS

Both SARS and MERS are corona viruses but are different. Corona viruses usually manifest themselves in people as Upper Respiratory Tract Infections, but both SARS and MERS are much more severe. According to the WHO and CNN, MERS attacks the respiratory system like a common cold would however, this virus can eventually cause organ failure. MERS is being referred to by the WHO as the “novel coronavirus.”

7. Symptoms are the Same as the Common Cold But Harder To Spread

Saudi Arabia on #MERS: Incubation period could be between 2.5 days and 14 days #WHA66

According to the WHO the initial symptoms are similar to the common cold, especially cough, fever, and shortness of breath. The WHO has warned all countries to be on the lookout for unusually acute and severe respiratory infections, which is how the virus manifests itself. Although, unlike the common cold, the MERS virus is said to be rather difficult to spread from person to person.

8. No Travel Restrictions Have Been Set

As of now, the outbreak has prompted no restrictions on travel, though the WHO has advised that health care providers in infected areas remain vigilant. The Center for Disease Control (CDC) does advise Americans traveling to the Middle East to be careful:

U.S. travelers to countries in or near the Arabian Peninsula monitor their health and see a doctor right away if they develop fever and symptoms of lower respiratory illness, such as cough or shortness of breath. They should tell the doctor about their recent travel.

9. There are Currently No Vaccines

As of now, those infected with MERS-CoV are being given symptom based treatments as there is not yet any vaccine or cure for the virus. A number of news sources are now reporting that quarantining infected individuals is a necessary precaution. French doctors are now estimating the incubation period of the virus to be around 9 to 12 days rather than the 7 to 10 days estimated earlier this year. This means a longer quarantine period is essential to stopping the spread of the virus.

10. Scientists Are Troubled By How Little They Know About the Virus

One of the more troubling moments of Chan’s presentations at the World Health Assembly came when she confessed to scientists’ confusion over the new virus:

We do not know where the virus hides in nature, we do not know how people are getting infected. Until we answer these questions, we are empty-handed when it comes to prevention.

The mysterious virus has triggered some doctors to write an academic paper about differentiating the virus and isolating it within a man who has pneumonia. It was published in The New England Journal of Medicine in November of 2012.

This is a developing story and we will bring it to you in the coming weeks.

Loading more stories
wpDiscuz
0
0
Would love your thoughts, please comment.x
()
x
| Reply
With 27 dead and up to 49 infected, the WHO is worried about the future of the MERS SARS-like coronoa virus that is spreading in the Middle East and Europe.