The town of Moore got hit the hardest on Monday when multiple tornadoes ripped through Oklahoma, flattening entire neighborhoods and killing at least 24 people, including nine children. Twitter user @WithDrake created this devastating before and after photo of the destruction the town is facing right now.

I just made this for @nowthisnews. Can anyone else find a flaw in my spacial cross-reference? (This is in Moore, OK) twitter.com/WithDrake/stat…

Two schools were torn apart on Monday, including Plaza Towers Elementary, leaving 20 children dead and even more missing. Rescue workers are are still searching for survivors underneath the wreckage that used to be the school.

This is a photo of what Plaza Towers Elementary looked like before the 200 mile per hour tornado crossed its path:

Here’s an aerial before and after shot of the same school via the Daily Mail: 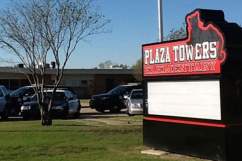 Loading more stories
wpDiscuz
0
0
Would love your thoughts, please comment.x
()
x
| Reply
Check out the devastating before and after photos Moore, Oklahoma when a tornado touched down on Monday, killing 24 people, including nine children.