NASA announced on Friday that it recorded the largest meteor impact on the moon since scientists started monitoring it eight years ago, reports National Geographic.

NASA’s Meteoroid Environment Office reports that a boulder-sized meteor crashed into the surface of the moon in March and created such a massive explosion that a person looking up at the moment would have been able to see it from Earth with the naked eye.

“On March 17, 2013, an object about the size of a small boulder hit the lunar surface in Mare Imbrium,” Bill Cooke of NASA’s Meteoroid Environment Office said in a statement. “It exploded in a flash nearly 10 times as bright as anything we’ve ever seen before.”

The explosion lasted only a second, but it shone like a 4th magnitude star. An analysis of images caught by the NASA monitoring program’s 14-inch telescope led researchers to estimate that the meteor was 1.4-feet wide, 88 pounds and slammed into the moon at 56,000 miles per hour. The impact released as much energy as five tons of TNT.

A still frame of the explosion caught by NASA’s telescope.

The same night, two fireball detection networks detected an unusually large amount of bright meteors across the night skies. Earth was unharmed, but the moons lack of an atmosphere makes it especially prone to impacts. Scientists have been monitoring the frequency of lunar meteor impacts with the intent on sending astronauts back to the moon.

“We’ll be keeping an eye out for signs of a repeat performance next year when the Earth-Moon system passes through the same region of space,” Cooke said. “Meanwhile, our analysis of the March 17th event continues.” 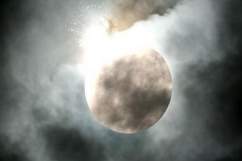 Loading more stories
wpDiscuz
0
0
Would love your thoughts, please comment.x
()
x
| Reply
NASA announced on Friday that it recorded the largest meteor impact on the moon since scientists started monitoring it eight years ago