Three thousand shocked spectators witnessed a tragedy over the weekend as a plane went down in a giant fireball at an airshow in Madrid, Spain.

Warning: footage may be disturbing.

An HA 200 Saeta, similar to the plane that crashed in Madrid. (Image via Wikipedia) 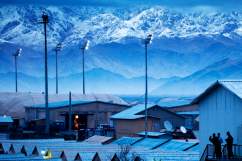