South Carolina State Representative Ted Vick (D), 40, was arrested on Tuesday night on a charge of driving under the influence, reports WLTX.com.

In May 2012, Vick was pulled over around 1 a.m. in Columbia, South Carolina, for speeding. After the stop, police found Vick driving with “his eyes glazed over” and that he “smelled of alcohol,” according to a police report, and with a .380 caliber gun in his pocket. Also in the car with Vick was a 21-year-old female USC student, reports WISTV.com. At that time Vick refused a breathalyzer test.

The police report stated Vick admitted to “having a few drinks” and was “unsteady on his feet.”

The concealed weapons permit that Vick held for his gun had expired. In 2011 Vick attempted to pass a bill in South Carolina, in light of the shooting of U.S. Congresswoman Gabrielle Giffords, that permitted state representatives to carry concealed weapons without the normal application process. The bill failed.

At the time of his arrest Vick was running for Congress in the state’s 7th district; he withdrew after the incident.

2. He Was Busted at the State Capitol, Where Cops Physically Restrained Him From Driving

In yesterday’s arrest, an officer claims to have seen Vick stumbling into the parking garage in the state’s capitol building in Columbia. Allegedly he had to use a wall to “brace himself” and prevent himself from falling. When police saw him get into his car and turn the engine on, the officer told him to stop and Vick complied initially. When police attempted breathalyze him, Vick got back in his car and put in drive and the cops had to physically restrain him; at this point he was arrested.

He is being held on a $997 bond; as of this morning he was still in Richland Detention Center.

WLTX.com reports that Vick went to Cowboy Brazilian Steakhouse in Columbia, South Carolina, and claimed to have had “two glasses of wine.” An officer asked if Vick felt he could still drive after such an amount, to which Vick replied:

No, I have drivers.

4. He Has Been Elected in His District Without Opposition Since 2006

After being elected in the 53rd District of South Carolina, for the County of Chesterfield, in 2004, Vick has run opposed and been consistently re-elected. He has won numerous awards within state based on his career in the state capitol. Vick has been endorsed by the blue-dog coalition.

He lives in Chesterfield, South Carolina, with his wife Melissa — his high-school sweetheart — and their twin daughters, Willow and Laurel.

Vick has been a Major in the South Carolina National Guard since 1990 and is the CEO of the Ted Vick Motor Company.

5. His Arrest Came on the Same Day as Landmark Changes Were Proposed in Drunk Driving Laws 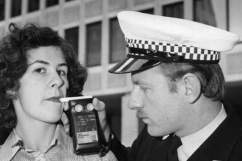 Safety Board Wants to Lower U.S. Drunken Driving Limit to .05

Yesterday, The National Transportation Safety Board voted to propose that all 50 states lower their blood-alcohol limits for drunk driving from 0.08 to 0.05.

10,000 people are killed each year in the alcohol related driving incidents with 170,000 being injured. It’s estimated around four million Americans drive drunk each year.