Richard DeCoatsworth, 27, a hero cop from Philadelphia who sat beside First Lady Michelle Obama during a 2009 congressional address by President Barack Obama, has been charged in his hometown with raping two women, and other horrible crimes, reports Fox News.

In 2007, while DeCoatsworth was a rookie cop in the Philly PD, he was shot in the face with a shotgun during a routine traffic stop. Despite his injuries, he managed to chase his assailant, and during his pursuit he made enough of an identification to lead to an arrest of a man that same day. The man, Antonio Coulter, was sentenced to between 36 to 72 years for his crime. At the time of his sentencing DeCoatsworth said:

That young man’s life is over now. He’s going to have to find some way to get used to his new home. I’m sure the guys up there [in state prison] can’t wait to meet him.

NBC10 reports that authorities believe DeCoatsworth met a woman in a bar (CBS Philly reports it was a “party at a confidential location”) in the North Front Street area of Philadelphia. After meeting her, he took her to a Days Inn hotel, where she alleges he forced her to have sex with him; this occurred two weeks ago.

Last Thursday (May 16), DeCoatsworth went to the woman’s house, where he allegedly forced the same woman, and another female who was there, to perform oral sex on him while he held them at gunpoint, and also forced them to take drugs.

The women called the police after DeCoatsworth left, around 5 a.m. Friday morning. The former hero was arrested early on Saturday morning at his home in the 2700 block of Salmon Street in the Port Richmond section of Philadelphia. Cops took guns and drugs from the home and charged DeCoatsworth with a total of 32 offenses.

His bail of $60 million is one of the highest in the history of Philadelphia — $25 million for each of his victims, and $10 million for another unrelated case (see below). He will face his first hearing next month.

It’s unfortunate. If it’s true what he did, he deserves to be where he is for a long time.

On May 9, DeCoatsworth allegedly assaulted his girlfriend at their home, which accounts for the $10 million addition to his bail. One of his neighbors told NBC10 about his relief upon hearing of the former cop’s arrest:

I am scared to be saying this now but I hope he stays where he is at; he has been a thorn in the side of this neighborhood for so long.

Another neighbor, Rhoda Nicholson, painted a different picture of DeCoatsworth to Philly.com:

“He always helped us. He brought me roses all the time,” Nicholson said, noting that DeCoatsworth would help her and her husband carry groceries and once helped them bring in a sofa bed. “[It was] all positive, never saw anything negative . . . It’s like Rich was a Jekyll and Hyde.”

3. A Neighbor Took DeCoatsworth to Court, Saying the Former Cop Made Him “Fear For His Life”

In February, a neighbor of DeCoatsworth, Steven Kocher, was awarded a mutual stay-away order by a court after he filed a private complaint against the former hero. Kocher owed DeCoatsworth $2,000. When Kocher couldn’t pay, he claimed the former cop abducted him, stole $218 from him, threatened him and also threatened Kocher’s mother. The neighbor says:

I’m definitely concerned for my safety of my life and my mother’s safety; it all stems from a friendly, $2,000 loan that I received from Richard about a year ago. 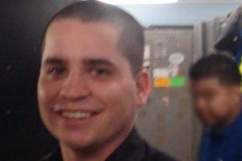 In 2009, a motorcyclist John James received three years of probation for trying to hit DeCoatsworth with his motorcycle. In retaliation, the former cop opened fire on James. DeCoatsworth fired two shots, hitting James in the leg once. After James’ sentencing, DeCoatsworth told CBS Philly that the defense attempted to portray him as a “rogue cop.” He said:

The fact of the matter is that I had no control over the situation, I was responding to a situation that this man decided to involve himself in. Unfortunately, when you aim an 800-pound motorcycle that travels at those high speeds at a uniformed cop, you are taking a chance with getting shot, and unfortunately that’s what happened.

5. He Was Involved in the Shooting of a “Mentally Ill” Man

In April 2009, the Philly Tribune reports that while DeCoatsworth was out on patrol, a man, Anthony Temple, charged at him. The two struggled and, in disputed circumstances, DeCoatsworth’s gun was fired. Temple’s family claims he was shot, but the former cop says it was discharged accidentally during the struggle.

Temple fled and was tracked by another officer who shot and killed him. Temple’s family was awarded $90,000 in an out-of-court settlement by the city of Philadelphia.

During his career in the Philadelphia police, DeCoatsworth faced nine Internal Affairs investigations.

Loading more stories
wpDiscuz
0
0
Would love your thoughts, please comment.x
()
x
| Reply
The hero cop — who was shot in the face and sat next to Michelle Obama at a Congressional speech — is now charged with rape and other horrible crimes.