Yesterday, the Interstate 5 Bridge over the Skagit River in Washington state collapsed, sending cars and people into the water.

As you can see from the shocking footage above and images below, both the northbound and southbound lanes on the bridge were affected. 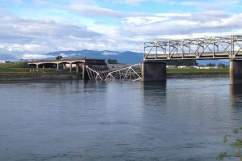 According to the Huffington Post, the bridge spans 1,111 feet and is located 60 miles north of Seattle. Shockingly, a member of the Washington State Department didn’t know when the bridge was last inspected and said “All of our bridges in the area are pretty old.”

Luckily no one was killed, but three people were injured in the incident.

Loading more stories
wpDiscuz
0
0
Would love your thoughts, please comment.x
()
x
| Reply
A major bridge in Washington state collapsed last night and we found some of the best videos and footage of the incident. Watch them here.