Two employees of the U.S embassy in crime-ridden Caracas – Roberto Ezequiel Rosas and Paul Marwin – are in stable condition after being shot outside of Antonella 2012 – a locale that is believed to be a strip club. The club – which is also known as “Angelus” – is located in the basement of a mall called Centro Comercial Bello Campo. The two men are believed to have been involved in a fight which originated at the nightspot. Antonella 2012 has a racy Twitter account which features photos of naked or scantily dressed women pole dancing. One of the club’s tweets invites its followers to come to a “sexy show.” According to Venezuela’s yellow pages, “Angelus club” is known for “specializing” in “entertainment for gentlemen.”

Some sources from Caracas have told Heavy.com that the club is also known for prostitution.

Yohanna Marra, a local reporter, reports that other people were beaten in the disagreement. 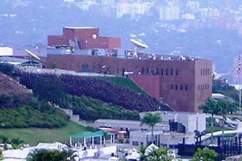 Heavy.com called into Antonella 2012 and talked to a representative – who asked to remain anonymous. At first the man was defensive and denied that the shooting happened. He also denied that the embassy’s personnel were ever at the club. Later in the conversation the representative admitted to the story and gave us the following statement:

Let’s talk like adults here. Yes. This is a “dancing” club. Make of that what you want. But who cares? Two men were shot. Who cares what they were doing here. It sure as hell isn’t our fault. Why does the media wants to ruin these guys lives – these guys who probably have a family and a wife – with this news that they were in our club? Its dumb. I have had to deal with police officers and with people from the embassy all day. Last week three people were killed in the mall. May 1st two people were killed and nobody came. Why do people only care when its not Venezuelan people who are dying and getting shot…. I live in Guatire and last week I get out of my car and in the corner I saw a man get killed in front of my house. He died and they took 20 bucks from him. Do you think the police came? No. Venezuela is worse than Afghanistan. Its worst than Iraq. This violence is our daily bread.”

Caracas – dubbed the “murder capital of the world” – has suffered from one of the highest crime rates in the world. Venezuela’s government rarely releases figures, but according to The Economist, Tareck el Aissami, the former interior minister, has admitted that Venezuela’s murder rate is close to 50 per 100,000 people – among the world’s highest.

Loading more stories
wpDiscuz
0
0
Would love your thoughts, please comment.x
()
x
| Reply
Embassy personnel got into a fight at a "strip club" before they were shot