Members of Lebanon’s of Hezbollah Shiite Muslim movement carry the coffin of their comrade during his funeral in the village of Timnin, in the Bekaa valley after being killed in the ongoing battle of Qusayr in Syria. (Getty Images)

The UN Human Rights Council has passed a resolution with an overwhelming majority that condemns foreign fighters in Syria .

The resolution refers to the Lebanese Shia movement Hezbollah, which has been active in supporting President Assad in the two-year-long civil war, which has pit government forces against rebel fighters. The resolution calls for immediate end to fighting around Qusayr, a strategic Syrian town where Hezbollah fighters have been particularly active.

The UN’s Human Rights chief Navi Pillay said that the dramatic increase in the role of Iran-backed Hezbollah militants is inflaming regional tensions.

An image grab taken from a video uploaded on Youtube allegedly shows smoke billowing from buildings in the city of Qusayr, in Syria’s central Homs province, following an airstrike by government forces. Forces loyal to Syria’s President Bashar al-Assad supported by Hezbollah fighters launched an assault on Qusayr. (Getty Images)

The vote passed with 36 in favor, one against, with eight abstentions. Venezuela was the only country that voted against the resolution, which was co-sponsored by the United States. Two delegations were absent. Russia — Syria’s key backer — called the resolution “odious” but did not participate as is is not a voting member in the council this year.

This news comes in light of another announcement as France said today that its intelligence services believe that there are as many as 4,000 guerilla fighters from Hezbollah currently active in Syria.

Hezbollah — from neighboring Lebanon — isn’t the only international involvement that is escalating tensions. As the fractured rebel groups continue their battles against President Bashar Assad, the EU recently voted to end an arms embargo, opening the possibility of new weapons shipments to rebels. On the other hand, Russia plans to ship several modern anti-aircraft missile systems to Syria, to deter foreign interference. Israel, meanwhile, is prepared to use force to stop the delivery of such systems, which it views as a threat. 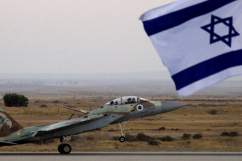