The Westboro Baptist Church have announced their plan to picket the funeral of Slayer guitarist Jeff Hanneman, 49, who died on Thursday.

You can listen to the parody the sick church made of Ozzy Osbourne’s classic “Crazy Train” here:

In 2011 the controversial church picketed an Ozzy show in Kansas, which is where the “Crazy Train” parody originates. At that time Ozzy was not impressed: 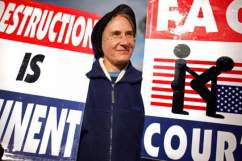