The Westboro Baptist Church released a press statement saying they had set their sights on country legend George Jones’ funeral, which happens at the Grand Ole Opry House in Nashville this Thursday.

But now, according to group higher-up Margie Phelps, the chances of that happening are “about 80/20 likely.” 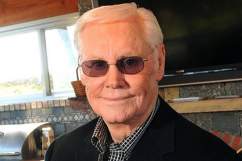 George Jones Dead at 81: 5 Fast Facts You Need to Know

In a press release the controversial church, whose anti-gay stance has gained them infamy the world over, says that Jones …

…used his talent to glorify himself and engage in much adultery. Rather than warn this nation of the consequence of proud sin against God, he [s]quandered every opportunity. To show His glory, God killed George Jones and cast him into Hell.

Entertainment Weekly reports that attendees will include:

Read More
Breaking News, George Jones, George Jones Dies, Westboro Baptist Church
The folks at WBC regard Jones as a "drunkard" but credit him as having a "decent" singing voice.