So just how do you replace the greatest manager soccer has ever known? Today the world was rocked by the news that Sir Alex Ferguson will step down as Manchester United manager for 26 years at the end of this season.

Ferguson came to Manchester in November 1986 after a highly successful stint as manager of Aberdeen in his native Scotland. He arrived at United, who were struggling and undisciplined at the time, but things changed when Ferguson stepped in. Over the course of his career with the famous club he won 13 championships, two European Cups, five FA Cups, as well as everything else imaginable. So, if you’re Man U, how do you follow that? 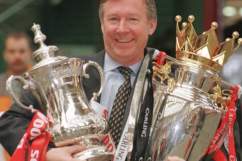 Here’s who you need to know…

The out-and-out favorite at 1/10, mainly due to reports of huge money being placed on Moyes last week. Other than that the Everton boss has much going for him. He’s consistently over performed with one of the team’s in the EPL — who do not have a foreign owner — keeping his team in the top-half of the table. Rarely, though, has Everton done anything else and he has been unable to take his team to the next level. Sometimes even he’s been accused of negativity when Everton have faced top teams, as if he accepted defeat, but will win every other game.

This kind of thinking is unacceptable at Manchester United; winning every game is a necessity. It seems certain that Moyes will leave Everton at the end of this season as he constantly dodged questions about his future. A Scot like Sir Alex, Moyers may be the favorite to succeed Ferguson.

Most definitely Sir Alex’s protege, when Jose rocked up in English soccer in 2004 it was clear Ferguson had massive admiration for the Portuguese coach, and he comes in as second favorite at 5/1. Since leaving England in 2007, Mourinho has conquered Italy and had a mixed spell in Spain as boss of the other biggest team in the soccer world, Real Madrid. He plans to leave Spain this summer with everyone speculating that he will return to Chelsea.

Mourinho’s outspoken personality and battles with the media will count against him as United’s owners will probably seek someone less combative than Jose. Where the “Special One” trumps Moyes is his proven record. Winner of the EPL and of the European Cup, Jose has a legacy that Moyes could only dream of.

The favorite of soccer hipsters the world over, Klopp has become one of the most powerful coaches in soccer in a relatively short amount of time. His Dortmund team will contest the Champions League final with Munich at the end of this month, and his young, exciting team are expected to break up as big offers will start to roll in. One of those expected to leave, Robert Lewandowski, has indicated that Manchester United is his preferred destination, so maybe his coach might join him?