A 10-year-old boy is the hero in Brooklyn, police said Tuesday, after he picked up a gun dropped by a home intruder and fired it, reports the ABC News 10.

Two men posing as FedEx deliverymen showed up at the Canarsie home around 5:30 p.m. on Monday. The boy’s two teenage sisters opened the door and the robbers ordered them to stay in the living room while they searched the house. The men went upstairs to the second floor where the owner of the home and the boy were hiding. When one of the intruders tried to enter their room the owner slammed the door on his hand so hard that he dropped his gun. The quick-thinking 10-year-old boy grabbed the gun and fired at shot at the robber. A shot was fired back, but no one was hurt. The two men then left the house running.

There were other children in the home at the time, but none witnessed anything. Police are investigating the incident.

The 10-year-old, in the meantime, is being praised for his heroic actions.

“Bravery man, bravery. That kid is a hero, he saved his siblings’ lives!” resident Serge Duthely said. “Not a lot of people would readily act like that, you understand what I’m saying? That’s instincts! He did a good job. I’m very proud of him. I’d love to meet the guy, the little kid.”

According to the New York Post, the family owns a business and two BMWs that can be seen in their driveway.

“They have a store, so maybe the person who robbed them knew there was a lot of cash in there,” said Kimberly Lindo, who lives in the neighborhood. “Look, they have two brand-new BMWs in the driveway. I don’t know, that’s kind of unusual for this neighborhood.” 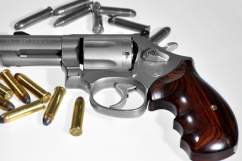 Shooting in Brooklyn Leaves One Dead, One Critical

Read More
Brooklyn, Crime, Heroes, New York
A 10-year-old boy is the hero in Brooklyn, police said Tuesday, after he picked up a gun dropped by a home intruder and fired it.