Former Patriots’ star Aaron Hernandez has been charged with the murder of Odin Lloyd as well as five other gun-related charges. He is pleading not guilty. According to prosecutor, Sam Sutter, Odin Lloyd’s body was found with multiple gun shot wounds, to his arms, side and chest. There is no indication that Lloyd’s death was related to a robbery, the a spare set of keys to the mysterious rental car that was registered to Hernandez were found on Lloyd’s person. When Hernandez returned the car, a rental-agent, upon completing a routine investigation of the vehicle found a shell casing and a piece of Bubblicious gum.

According to prosecutors, Hernandez had been upset that Lloyd was speaking with people that the former-Patriots star was having trouble with. Lloyd’s mother had to be removed from the court when she became upset.

Hernandez became “upset” with a group of people at bar called Club Rumor in Boston the previous Friday, this was the same group that Lloyd was talking to. After leaving the bar that night, the prosecution says Lloyd texted his sister to ask if she had seen who he was with, to which she replied, “NFL.”

Surveillance footage obtained by investigators showed Hernandez returning home on the night that Lloyd was killed with a gun in his hand. Other than that video tape, there is 6-8 hours of footage, from after the time that Odin Lloyd is believed to have been killed, missing from Hernandez’s security system.

BREAKING: Defense is worried about leaks about the case "so as not to prejudice the defendant's rights" #wbz #patriots

Aaron Hernandez has no license to carry a firearm. A search of Hernandez’s home found ammo and semi-automatic rifle, but not the murder weapon, though the ammo found matches the .22 murder weapon that killed Odin Lloyd.

Crime reporter @Bward3: unusual to hear as much detail as heard in #hernandez arraignment- such detail usually saved for opening statements

Hernandez will be held without bail.

The prosecution argued that due to Hernandez’s status and wealth he would be an extreme flight-risk. Hernandez’s lawyer, Michael Fee, argued that the star lives with his fiance and nine-month-old child, and added to his status, flight-risk would be impossible. Upon leaving the court, Fee said briefly “Aaron’s fine.”

Here’s Hernandez getting arrested earlier today at his mansion in North Attleboro, Massachusetts: 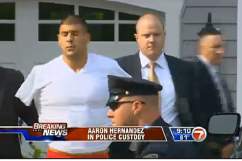