Information has just emerged that New England Patriots Player Aaron Hernandez, wanted by the police in relation to the murder of Odin Lloyd, was out at a club with the Lloyd hours before his death.

According to Fox in Boston, Hernandez, Lloyd and two unidentified men were partying at a bar and left together.

A source told Fox that a text message from Lloyd to another friend revealed that the four were leaving and that Hernandez was driving. Later that night, the three men, without Lloyd, returned to Hernandez’s house:

It is unclear where the car went or what happened during the ride, but according to the source only three men returned to Hernandez’s home at the end of the night and Lloyd was not one of them. 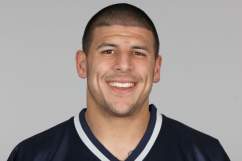