While he was a Florida Gator, playing for the University of Florida, Aaron Hernandez, 23, was questioned over a late-night shooting, reports the Orlando Sentinel.

Corey Smith, 28, and Justin Glass, 19, were shot at 2:30 a.m. after the got into their car just after leaving The Venue nightclub (below). The club was packed with Gator players who were drowning their sorrows after a defeat to Auburn. Someone went up to the car and began firing shots into the vehicle. Smith was shot in the head, which left him in critical condition, and Glass was wounded in the arm, reported WCJB.

Hernandez and three of his teammates were questioned by police in relation to the shooting but none were charged with any crime. One of those questioned was future Cincinnati Bengals star Reggie Nelson, who was around the scene at the time of the shooting.

No arrests were made in the case.

Hernandez, a star tight end for the New England Patriots, is believed to have some connection to the homicide of 27-year-old Odin Lloyd, whose body was found close to the Patriot’s TE’s home this week. It’s understood that Hernandez and Lloyd had been partying at a bar together prior to Lloyd’s death.

Hernandez is also being accused of shooting his former personal assistant, Alexander Bradley, in the face in February. Bradley says the incident cost him his eye-sight in one eye. In that case, Hernandez and Bradley had just left a night club in Miami. 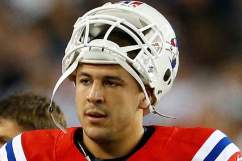 In addition, outside a night club in Providence, Rhode Island, in May of this year, police stepped in to prevent an altercation between Hernandez and a heckler. During that incident, a gun was tossed under car by a “heavyset black male.”

When Hernandez first joined the Gators at age 17, he was involved in an altercation with another person, but the charges were dropped.

Read More
Aaron Hernandez, Breaking News, Crime, Florida, Odin Lloyd, Shooting
wpDiscuz
0
0
Would love your thoughts, please comment.x
()
x
| Reply
Aaron Hernandez was questioned about a double shooting in Florida while he was playing for the Gators. The shooting took place in Gainesville in 2007.