This morning on his weekly radio show, New York City Mayor Michael Bloomberg not only defended the NYPD‘s controversial Stop and Frisk program, he encouraged it be used more against minorities and less against whites.

See What Your Friends Think!

According to data from the Center for Constitutional Rights, only 9 percent of those Stop and Frisked in New York in 2011 were white, as opposed to 51 percent black and 33 percent Latino. In all of those incidents where people were Stop and Frisked, only 2 percent of all stops produced contraband substances. 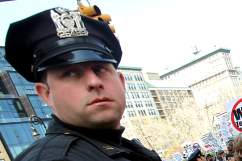