125 Fire Fighters are still scrambling to verify if there are any more people to be located and removed from the rubble after a condemned four-story apartment building collapsed onto a populated Salvation Army store. So far there is supposedly one casualty.

This story is developing, so stay tuned.

If anyone has any information or images of the scene, email ian@heavy.com.

According to the same source on the scene, people nearby said that “they were doing work next to the building next to Salvation Army, and the shock from that construction caused the Salvation Army building to partially collapse because these old building are all supported by one another.”

Here is a picture of the building taken just minutes before the collapse:

1. 14 People Have Been Removed

Philadelphia Fire Department Commissioner Lloyd Ayers told ABC that he will not speculate as to how many people total are in the rubble but as of now 14 people have been removed alive from the rubble.

2.One Person Has Died But The Conditions of the Other People Removed From Building Are Class 3

According to CNN, sources at around 3:00 P.M. are saying that a woman has died as a result of the collapse. Despite the fact there people were previously stating that there were two casualties, the number of those dead as a result of the collapse remains one.
There are four people that have been taken to Jefferson Hospital in Philadelphia, according to ABC. There were 2 taken to Hahnemann Hospital, and 4 were taken to the University of Pennsylvania, which brings the total number of injured up to 10. The Fire Department Commissioner said that the 12 people transported are “Class 3” meaning that everyone is stable and conscious. ABC has said at least one of the people brought to the hospital walked themselves in.

The Philadelphia Inquirer says that the buildings 2138 and 2140 Markets Street were the ones that collapsed. Between 20th and 23rd Street Market Street is shut down, according to eyewitnesses who told Heavy.com.

4. Reports Say There Was An Explosion, But the Police Chief Says No

According to multiple reports on Twitter, the incident may be an explosion.

However, according to Les Carpenter, the Philly police chief says it “wasn’t an explosion.”

Philly Police chief Ramsey just told me building collapse was a collapse and “definitely not an explosion.” He doesn’t know…

Now, police say that the building was slated for demolition. 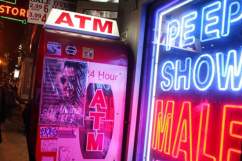 5. The Area Is Under Construction

Mayor Nutter, on the scene of the collapse at 22nd & Mkt., says the demolition of the 4-story building was conducted with the proper permits

According to Twitter, the area of the incident was under construction. The Mayor of Philadelphia said in a statement that the area has no history of code violations but more information will be given soon.

Loading more stories
wpDiscuz
0
0
Would love your thoughts, please comment.x
()
x
| Reply
A building in Philadelphia has collapsed and authorities fear it may be an explosion. Here's what we know so far