Massachusetts Governor Deval Patrick says he got “quite drunk” after alleged Boston bomber Dzhokhar Tsarnaev was captured and his older brother Tamerlan was killed. Patrick says he went to the Berkshires around dinner time on April 20th and went for a quick swim.

After his dip he went to the Rouge Restaurant & Bistro and asked to be seated away from view of the public, ate dinner and read a book downloaded onto his iPad. The governor was personally waited on by the restaurant’s owner, Maggie Merelle.

Patrick has said he was “quite drunk” when he left the Rouge, but Merelle has defended him, telling the Boston Herald, that he only had one or two glasses of chardonnay to compliment his duck confit and french fries dinner.

To make matters slightly more embarrassing for Patrick, he said he didn’t have any money by the time the bill arrived, but rather than making him wash dishes, Merelle agreed to allow the governor return the next to settle up. 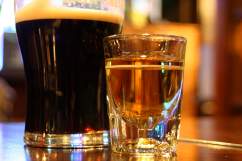