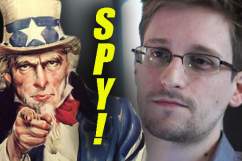 Reuters is reporting that Edward Snowden is en route from Hong Kong to Venezuela via Moscow and Cuba, where he intends to seek temporary asylum in the Latin American country with troubled US relations.

1. He Left Without Any Help from Hong Kong Authorities

Snowden left Hong Kong after officially being named a public enemy of the US yesterday. Hong Kong reportedly has no reason to prevent his escape. The South China Morning Post reports:

US whistle-blower Edward Snowden has left Hong Kong on a commercial flight to Russia. He left “on his own will” and did not have any help or protection from Hong Kong authorities, a government source told the South China Morning Post.

After the US asked Hong Kong to issue a provisional arrest warrant for Snowden, the Hong Kong Special Administrative Region government (HKSAR) responded (via CNN):

3. Snowden is Being Charged Under the Espionage Act of 1917

The Espionage Act has been used to charge people in many infamous US court cases. Wikipedia cites:

While Iceland refused to comment on rumors that it would grant Snowden asylum, Ecuador’s Foreign Minister is quoted in China Weekly as saying:

“Mr. Snowden may ask the Ecuadorian government for asylum, if he wants, and of course we will examine his request, as we did with Assange (WikiLeaks founder),” Ecuadorian Foreign Minister Ricardo Patino was quoted by local media as saying.

Venezuela, Cuba and Ecuador are all members of the ALBA (Bolivarian Alliance for the Peoples of Our America) bloc, an alliance of leftist governments in Latin America who pride themselves on their “anti-imperialist” credentials.

5. Snowden has Arrived in Moscow

CNN is reporting that Snowden has landed in Moscow. We’ll bring you more as the story breaks.