The Hunt is on for Edward Snowden as U.S. politicians are beginning to call for his arrest. Rawstory quotes a written statement issued by Republican Representative Pete King from New York’s Second District who also serves on the Homeland Security Committee as well as the Sub-Committee on Counter-terrorism and Intelligence. It says:

If Edward Snowden did in fact leak the NSA data as he claims, the United States government must prosecute him to the fullest extent of the law and begin extradition proceedings at the earliest date…The United States must make it clear that no country should be granting this individual asylum. This is a matter of extraordinary consequence to American Intelligence.

There is no real indication yet of what the government plans to do to Snowden. Like in the ongoing Bradley Manning case, the government will first have to evaluate how much damage they perceive the leak to have caused to national security and intelligence operations. A statement given yesterday by the Office of the Director of National Intelligence verified this evaluative process:

The Intelligence Community is currently reviewing the damage that has been done by these recent disclosures. Any person who has a security clearance knows that he or she has an obligation to protect classified information and abide by the law.

Ellsberg, Manning, and Snowden, three of America’s most famous whistleblowers

We cannot know for sure what charges the government will attempt to levy against Snowden but based on those being used against Bradely Manning or those used against Pentagon Paper whistle blower Daniel Ellsberg, we can assume he will face a violation of the Espionage Act, specifically 18 USC § 793 which reads:

Whoever, lawfully having possession of, access to, control over, or being entrusted with any document, writing, code book, signal book, sketch, photograph, photographic negative, blueprint, plan, map, model, instrument, appliance, or note relating to the national defense, or information relating to the national defense which information the possessor has reason to believe could be used to the injury of the United States or to the advantage of any foreign nation, willfully communicates, delivers, transmits or causes to be communicated, delivered, or transmitted or attempts to communicate, deliver, transmit or cause to be communicated, delivered or transmitted the same to any person not entitled to receive it, or willfully retains the same and fails to deliver it on demand to the officer or employee of the United States entitled to receive it

Depending on how harmful the government evaluates this leak to be or who gets their hands on and utilizes the information, the United States Government may also consider him an enemy combatant for leaking information that directly aids enemies of the United States. His case will most likely follow a similar trajectory to Ellsberg’s rather than Manning’s because Manning is in the military 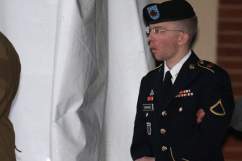 Pvt. Bradley Manning Finally in Court and Could Get Death Penalty

This morning, the world media chased Edward Snowden to the Mira Hotel in Hong Kong where he stayed for an undisclosed number of nights and checked out early Monday. His presence in Hong Kong prompted everyone to ask the question, did Snowden flee there to avoid extradition and prosecution? The answer was a resounding no.

According to the Washington Post, America has a long-standing extradition treaty with the United States excepting rare cases having to do with political crimes. However, the Post reports that Regina Ip, a Chinese legislature said that Hong Kong was “definitely not a safe harbor for him.”

Where he is now and where he will go is hard to say, but his options may be exponentially decreased after the government decides to charge him and begin the extradition process.

Loading more stories
wpDiscuz
0
0
Would love your thoughts, please comment.x
()
x
| Reply
NSA Leaker Edward Snowden was seen most recently in Hong Kong but is now on the run. Republican Peter King is calling for his arrest but where is he and what are the charges?