As you can see in the video above, a fire has erupted in Santa Monica, eight blocks from the Santa Monica College shooting of this afternoon. 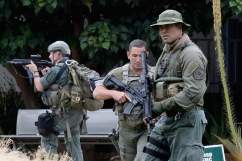 Per Buzzfeed News, KTLA is reporting that two men are confirmed dead inside the building:

A car jacking occurred at the scene, too, with shots being fired in broad daylight. A witness said that after the suspect car-jacked one vehicle, another car pulled up behind him and hesitated. The suspect responded by opening fire on the second car.

According to KTLA, the woman in the car had her vehicle stolen and was shot 3-4 times in the arm, but survived the attack:

Of the house’s residents, KTLA cites neighbors who say a man in his 50’s lives there with his two sons in their 30’s. They described the family as a bit reclusive, keepers to themselves, who not many people know explicit details about.

The Los Angeles Times, reports that the man who set the house on fire was indeed the man from Santa Monica College. He allegedly fled the scene of the fire, an attempted break-in gone awry, and tried to hide out at SMC — but not before opening fire at passing vehicles on Pico Blvd.

Here’s a map (via @Newsbreaker) of where each event transpired:

Loading more stories
wpDiscuz
0
0
Would love your thoughts, please comment.x
()
x
| Reply
A fire has erupted in Santa Monica, eight blocks from the Santa Monica College shootings of this afternoon.